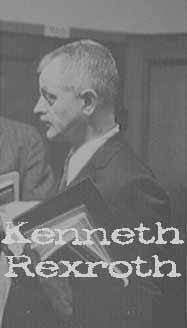 Kenneth Rexroth was not a Beat poet. He led his own earlier cultural movement in San Francisco, inventing the idea of the Northern California city as a culturally 'happening' place. Before Allen Ginsberg arrived at Rexroth's doorstep in 1953 with a letter of introduction from William Carlos Williams, Rexroth had already gathered together several young poets who would soon participate in the Bay Area Beat scene, particularly Gary Snyder, Michael McClure and Philip Whalen.

In this role as the master of the city's poets, he presided over the introduction of the Beat Generation to the world in the mid-to-late fifties, risking his name and reputation on the unconventional young upstarts, and organizing the Six Gallery poetry reading that caused a literary sensation in 1955.

According to some biographical material, Rexroth later grew slightly irritated as the Beats began to reach immense fame, often offending his sensitive poetic ideals with their crazy hijinks. But this is typical old-guard vs. new-guard stuff. Rexroth was an important poet in his own scene, and deserves our eternal appreciation for having invented the idea of San Francisco as a center of literary innovation.